What do you do: Translator, Photographer, Writer, Mother,

Where do you live: Birmingham, UK 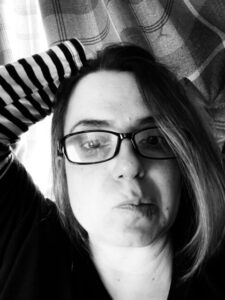 How did you start your day today? Do you have a morning routine? What do you have for breakfast, do think a good diet is important?

I normally start my day with a cup of coffee, so that happened today. I like to get up before everyone else because I am not exactly a morning person. I tend to have a better day when I have an hour to wake up by myself. I am currently following The Artist’s Way by Julia Cameron, so I tend to write morning pages (when I don’t forget and/or feel like it) and then jot down whatever comes to mind that I should be doing that day. However, often I cannot think of what I might need to do that day and that is the worst feeling.

I try to have some fruit or veg for breakfast with carbs and protein. So today e.g. I had scrambled egg on German rye bread with tomatoes and cucumber. My hankering is for sugar first thing, but I try to stay away from it that early in the morning. I would say a good diet is a great thing, but I am trying not to get too hung up about it.

How do you stay active?

Physical exercise is a continual challenge for me. In an ideal world I go for a walk every day and maybe do some strength exercise 2-3 times a week. The reality is that time often gets away from me. I am also living with Long Covid, which, for me, means that a long walk one day means two days of utter exhaustion.

What do you do to relax?

I am finding relaxing super hard. When people look at me watching a show for example, they might be fooled into thinking that I am chilling, but really my mind is racing at 100 miles an hour. The best thing for me to relax is to go for a walk listening to an audiobook, cooking for pleasure (not the routine hell it can become) and reading.

Do you have a favourite word or phrase?

“Everything will be fine” muttered about 1 million times every day.

Have you read anything good recently? Is there a book that changed your life?

I read a lot so that’s a funny question for me. I recently read “Unwell Women – Misdiagnosis and Myth in a Man-Made World” by Elinor Cleghorn, which despite some short-comings was a brilliant read. I also just finished a book in a historical mystery series that I love “The Shadows of Men” by Abir Mukherjee. This won’t be released until November, but there are already 4 books available, and I adore this series. Set in 1920ies Calcutta, it’s a genius portrayal of the ills of colonial rule whilst also being brilliant mysteries.

Which 5 albums would you want to have with you on a desert island?

Oh that is such a hard one, because it would change every week.

The Cure would have to be on that list, I have loved them since my teens. Maybe the “Head on the Door”, which was one of the first albums I ever bought, I was 12 when that came out.

I am currently obsessed with the soundtrack to the Korean Drama Nevertheless, so that would be on the list as well.

Most likely “Vintage” by Soolking, he is a French-Algerian rapper and I love his music which blends rap and Arabic pop.

“Kommt zusammen” by German group 2raumwohnung, I loved this album since it came out in 2001, sort of techno-pop-grunge mix.

And probably Taylor Swift’s Willow. I do love a bit of Taylor.

Ask me next week and the list will be different.

What is the best piece of advice you’ve ever received and who was it from?

My grandmother used to sing “Wenn der Herrgott net will” which is a song from a 1950ies movie, basically saying that if God does not want something for you no fretting will help. And although I am no longer Christian, I often think about this when something doesn’t go my way and hum the song. Some things maybe just aren’t meant for you.

When you were young, what did you want to be when you were a grown-up? And what was your first Job?

I wanted to be an archaeologist, but studied economics and then worked for a German broadcaster.

What do you do now and how did you get into it?

I am now a translator and a photographer. It just happened. Things just do. I have come to accept it. It’s probably a bit flippant, there is still work involved and I work hard at things (probably way harder than neurotypical folk) but I can never in hindsight look back and say: “so I did this, which led to this and then this happened.” I wish I could, it would be so helpful.

Creativity and thinking differently are often credited to neurodiversity. Would you say that is true? And if yes, could you give an example?

Most definitely. It took me years to understand that not everyone thought like me. It always came as a shock. For example, when I have to do a repetitive task, I will always try and find the best, most streamlined way to do something. Doing something in a complicated way when there is an easier one is a big frustration for me. A lot of people never do that and I just don’t get why you would just do something without trying to improve the process. The flipside of this is that I can spend ages trying to come up with a better way of doing something, but then not actually doing the task. But that’s a different story.

When you feel overwhelmed or unfocused, or have lost your focus, what do you do to get back on track? Do you have any hacks, tips or do you use any apps to keep you on track during the day?

Body doubling and accountability tend to work for me the best. A few days ago, I had a terrible “squirrel shiny day” thing but wanted to achieve some stuff, so my husband made me write down a list with small to dos, the smaller the better that would get me closer to the goal and then checked in with me a few times that day to see how it was going. To neurotypical folk that might look weird, but quite often a task that requires lots of steps is too overwhelming for me and it helps when someone points out that I should break it down. So “laundry” becomes a 6-step process instead of just a single task. Or “update portfolio” turns into a 10-step task. It also stops me from getting stuck too often.

What makes you happy?

Adventures big and small. New things (that might be an adventure, a new coffee shop to try out, a new book, fresh bedding etc.). Ideas. People who can follow my weird stream of consciousness. Food. Woodland. That first cup of coffee in the morning. Listening to rain while watching a movie. Taking pictures. Random encounters with people. Art. Discovering stuff. Learning new things. Getting into something. Researching stuff. There are lots of things that make me happy.

What has been your biggest achievement so far?

I think overall everything I have achieved is a big achievement. I have a relationship and a child. I have survived and even thrived occasionally. For neurodivergent folk that’s quite a lot. I am grateful all the time.

Do you have a Positive ND message to the world? Imagine you have a £5 million advertising campaign to spend on billboards all over the world, what would you say?

“If the roles were reversed and neurotypicals had to fit into a neurodivergent world, they wouldn’t last a day. Look at how far you have come. It’s hard, and often frustrating, but try to work as much with your neurodivergency as you can and opt out from fitting in as much as you can.”

Final question – where can people find out more about you? Do you have a website and social media pages?